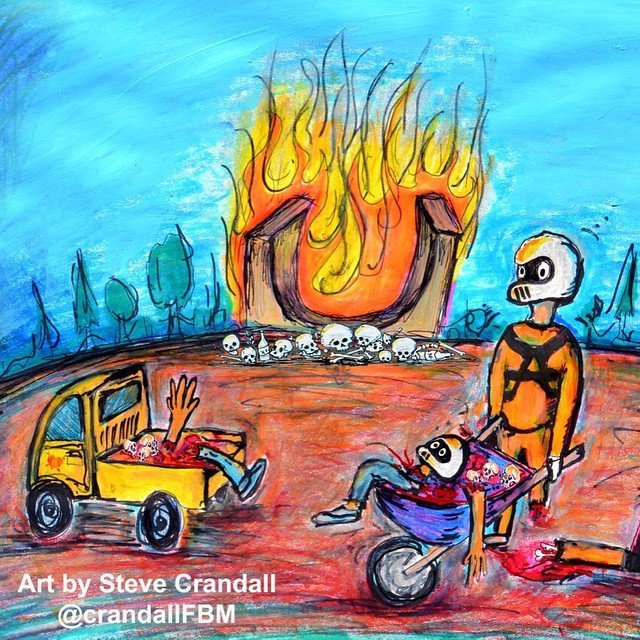 Photo Caption: Hoffman and McCoy Collide: I told this story on facebook and we got a lot of requests to make an edit… SO…. *total story on my Facebook cause Instagram limits the text or just wait for the edit… Edit dropping tomorrow at 3p…

Dennis McCoy came down to ride and I talked him into jumping out of a plane with me. It was most amazing day until… We got back to my house and jumped on the vert ramp for a quick session before Dennis hit the road. We were doing doubles on 7/20 for the first 720 Worldwide BMX Day. Well… I messed up and head on collided with DMC. Nearly killed him, seriously. I bruised and fractured my pelvic (pictured) but I wish I took more for Dennis. His bars hit me and stabbed him in the side and sliced him open, like a machete. It barley missed his artery, which was hanging out. We were both on the ground asking if each other could get up and how our injures were. Neither of us could move. Then Dennis noticed his gouge and said, I have to go to the ER. So I got myself to my feet and climbed back on the ramp. Once I got there I could barely move anymore. We were baking in the sun, so Dennis got up, walked off the ramp somehow, for water. He slowly got to a chair, sat down, gulped some water and said we have to get a car and our phones are on the deck. I dropped into survival mode, I sucked it up, climbed each deck, got our phones and crawled to my nearest car, which happen to be a little Japanese mini truck that’s right hand drive with a left shifter. I got in, drove down this dirt hill to get D and realized I couldn’t lift my leg to the clutch to shift, so I kept it in first. By this time he can barely move and the car I chose didn’t make it any better. After a few painful moments Dennis made it into the truck and I got it in gear and we were off to the ER. Dennis keeps making me feel better by being in the best spirits cracking jokes about the absurdity and ridiculousness we were experiencing. I’ve been cursing myself out since I first saw we were headed into each other. Dennis and I get to the hospital but realized I couldn’t get out of the car now, but then I know D can’t because..